We are on day three of the first leg of our new writing project. The first two days we got a chance to meet the three writers we will be working with in the spring and now are getting some time time with each to pick their brains and get a sense of their writing style. 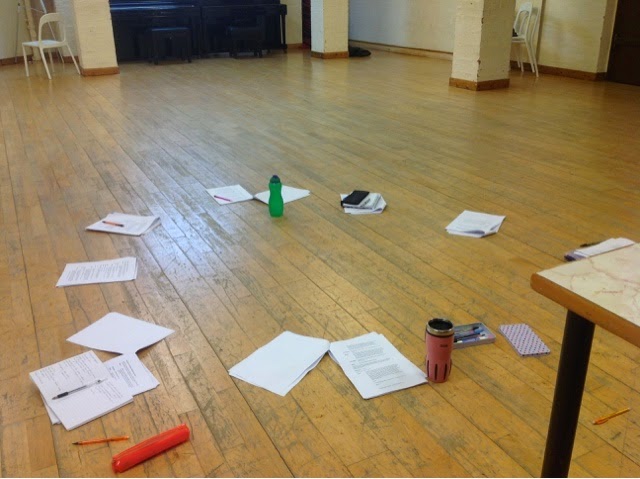 We are more than half way through our Ensemble Project week with the sensational Ewan Downie of Company of Wolves. We have been exploring the awareness and how to move our body which sounds simple, but is about the farthest thing from. To truly let your body do what it wants and not hinder yourself, while also breathing (again, sounds simple), accessing, connecting or letting go is jarringly difficult. It is strangely foreign. I think it's how you would feel/react if you were a conscious animal that is not really self aware or being a baby again with the knowledge of your "adult" self. It's weird and We've also some really fun and oddly precarious idea of status and how to manipulate it both for yourself and others.
Depending on the person, it can be really easy to either one up or lower your status for different reasons. You can even lower your status to actually one up someone which then actually puts you at a higher status. The most interesting exercise was to try and match the status of a partner and maintain. It's amazing how tiny little movements, gestures or inflections of the voice either raised or lowered your status in the room with you hardly knowing it. This work has certainly made me more self conscious of my behavior in the real world. Some things I was taken aback to think I actually do that! Likewise, there were ways I was proud of how I could manipulate status. This was accentuated by behavior lists that suggested a certain type of person.
Yesterday we looked at focus and where the eyes go and physically and mentally. You can have a close, medium, and distant focus. Then there is soft focus and "coning" which is similar to zoning out, but like the rest of our explorations, most about letting the body do what it wants. So you let your eyes just looking everywhere without actually focusing. Then we deep-eyed each other. Like a baby, you sort of close range cone into someone's eyes essentially drawing them in. It's kinda trippy. We then deep-eyed in the form of a teenage dance party. After we created lists of insults and had some boring improvs that were then layered with our lists.
On top of it all, we are working on Wole Soyinka's adaption of The Bacchae by Euripides. What a ridiculous productions. So epic. Those greeks were really demented and genius. We've done some interesting exercises including a lot of stomping and running (my feet hurt), found some cool new ways to read the text.
Everything is very free and I feel very comfortable working. However, after having several weeks of small groups, being thrown back into the whole 23 of us, which I thought would be fantastic, has actually left me a bit distant and I find myself feeling slightly isolated and internal. Maybe thats a good thing. Maybe I ate something weird. Maybe it's the nature of the work. Maybe it's just me. I don't know. Perhaps things will come to light these last two days.
at 11/13/2014 01:01:00 AM No comments:

The last two weeks have been kind of bizarre and surreal. It feels like I've been here for a lot longer than I have. In a week and a half I'll have been in Glasgow two months. Every week brings a new challenge and the work continues to get more focused and intensity levels rise.

Since my last post we finished our realism project which culminated in a showing of our scenes from Three Sisters. At the time, I wanted it to be done and move on to the next thing. Looking back on it now I wish we had had another week. In general, I thought our scene went very well. I felt great about the work I did. The things we explored in our rehearsals were all warranted and helpful in at least some way. Some were amazing. Some exercises just didn't do it for me. We did some really interesting and wonderfully insightful improvs in our characters at different ages and with different circumstances. I particularly liked the improv we did where it was the first christmas after the Prozorov patriarch passed. The gifts we each gave to one another were beautiful, poignant, and heart-breaking. I also felt like our dynamic as a family was accentuated by our good chemistry, especially the Masha/Andrew relationship. The improvs that explored them were really insightful and had a lasting impact on me and the character.

Our follow up meetings with Mark and Eve were very helpful. I knew that certain things would come up in terms of my habits and what I needed to work on. It can be jarring sometimes and even disheartening to hear your "problems" or as I like to call them, "oppotunities for learning". The nice thing about this project for me was that we did have the time and space to explore how to really dig into a scene and a character. In hindsight (mine happens to be 20/20) I would have benefitted from another week if only to be able to explore my "opportunities for learning" within the scene that was now in my body as well as find the depths of Andrew that I still don't know existed. They say the best/real work only comes after you think you've got it or have exhausted it. I don't know who "they" are or if that even makes sense, but I like the notion.

The following week was spent partially recovering froma very fun halloween weekend. We also had auditions with Mark and Gordon Barr who will be directing our Renaissance project (King Lear and Edward II, respectively). We also had very meetings concerning our showcase material. I know I have one scene that has some amazing dramatic internal struggle, but I'm still sort of on the look out for a good contrasting high-energy funny scene. We've got months, so I'm sure something will turn up. :-)

At the end of the week I had a barrage of theater experiences. I finally got over to A Play, A Pie, and A Pint. The pie and the pint part was great, as was the company (thanks Claire and Sophie for letting me tag along), the play left a lot to be desired, but was engaging in the way it's hard to look away from a homeless person going crazy on the opposite side of the street. Some pretty atrocious stage combat, but none the less "enjoyable".
I also saw both shows produced by the RCS BA 3rd years. I didn't enjoy the Hypochondriac. The actors did a fine job, I just don't like that play or its characters. It's Moliere at his worst in my opinion, full of long winded speeches and crude/downright disgusting potty humour. In contrast, The Country Wife was a delightfully funny well-executed play. It's also a better script and story. Glad I ended the week with that one.

Saturday, we started our ensemble project with Ewan Downie, of Company of Wolves. Lots of physical movement exploration. He is fantastic to work with. We've been sort of rough staging and exploring the Wole Soyinka adaptation of The Bacchae by Euripidies through exercises. Wow, what an epic freaking show. I would have loved to see how they did this at the National Theater. I also can't imagine it being done anywhere else just in terms of scale.

Last night also marked my fourth Stage Combat class. We reviewed pushes, slaps, and punches. Then started on falls and I even got in a little whip cracking tutorial.

Email ThisBlogThis!Share to TwitterShare to FacebookShare to Pinterest
Newer Posts Older Posts Home
Subscribe to: Posts (Atom)
Hey Friends, Family, and Followers! This blog is for people to keep up with the Dan train. Live Hard!