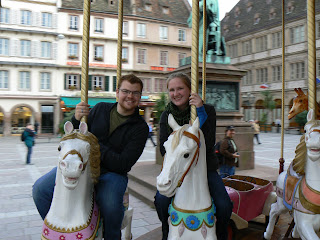 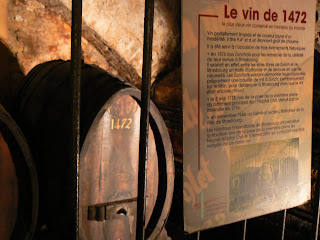 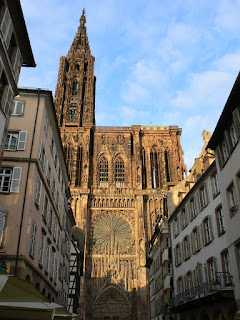 9-14-09
Today we had a whole day in Strasbourg. We went to the Notre-Dame de Strasbourg, this gargantuan cathedral. We climbed the 330 consecutive spiral steps to the lookout platform on top. Then we visited the Museum of Fine Art in the Palace de Rohan. Got the stink eye from some frenchies selling us crepes. Found our way to the historic wine cellar beneath the hospitol where they have wine preserved in its original barrel from 1472! Received more stink eye. Walked twenty minutes to the botanical gardens which were closed as of 3:30pm (LAME!) Took a boat tour of the city on the River Ill. (The children setting on the audio tour headphones kept me awake. Cap'n Jack his parrot, Coco, are quite entertaining and educational.) Then took a carousel ride in Gutenberg Square before getting the major french stink eye at the brasserie where we didn't get served our tartes flambées for an hour! ...*sigh*
at 9/14/2009 01:19:00 PM