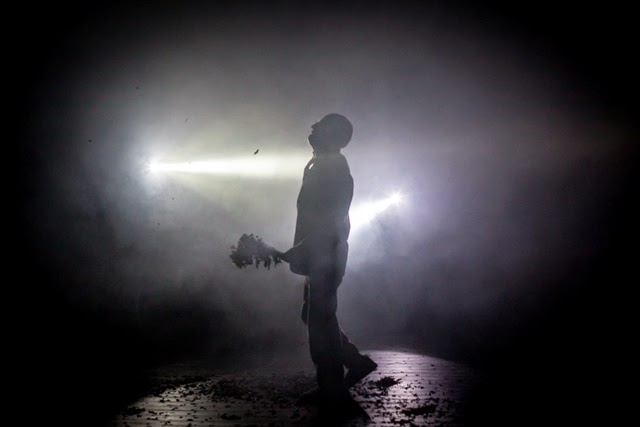 A group of us went to the Tramway Theater tonight to see a Vanishing Point production called Tomorrow. It. Was. Stunning.

Probably the most engaging, sad, immersive, heart-wrenching, simple, devastating, sweet, funny, guilty, haunting play I've seen in a long time. It was certainly one of the most unique theater experiences I've attended. Tomorrow dealt with alzheimer's disease. But it was so much more than that. It brought the audience into the mind and forced you into this sort of out of body experience. The atmosphere that was created was so chilling and alienating and yet when it got comforting and warm at times, I almost felt guilty and at the same time relieved. The superb use of fog and lights set the tone more masterfully than any stage production I've ever seen.

It started out in darkness. Slowly, a wilting violin piece played and a piercing yet heavy and antique side light came up on people at a table prepping these extraordinary full head and shoulder masks. One by one the players came in took the masks gently and coldly off through the side doorways down stage. As the scene faded an old man bent at the waist shuffled in holding a bunch of flowers. It started snowing. He struggled around for a while. (It was a beautiful lesson in movement and patience with yourself.) He finally dropped the flowers just before a young, well-dressed man in a tie came jolting across the stage (on his way to the hospital where his wife was giving birth). We saw his reluctant decision to help the old man. The oldman crumpled and then started fighting the young man. He remained hunched over with his head between the young man's legs and would not let go of his knees. After waves of awkwardness, intesity, sympathy, and humor with in the struggle, he finally got the old man to sit on a chair (bench) down stage right. When he got a glimpse of the old man's face something in him stopped. and then he closed in and pulled out the old man's tie. This created a definite shift in energy. The young man backed away confused toward his previous destination. The lights subtly shifted and as the young man turned back the old man had vanished. (Seemless theater magic.) As the scene changed, the young man exited and re-entered to a "hospital" with a nurse and met a girl  he new and asked about his wife. He was invited to sit and the nurse came back with one of the old man masks from the start of the play. The following action was some of the most jarring/disturbing/alienating parts of the play. In short, the young man was forced into the old man mask and a change of clothes. He was now the the old man from his encounter and himself.

This is just the tip of the iceberg. There were so many moments that hooked me. I especially liked the sequence shown in the above picture. The fog floated out into the audience. There were only three flashlights used all roaming and shining at the audience. I loved how there was the constant low banter from the nurses as a kind of reminder of location, but also ambient noise and really maintaining the only constant these victims had. As the lights wondered through the audience a figure would appear seemingly out of nowhere and the lights would focus slightly on the patient meandering through the dark haze and once again disappearing.

It was hard to laugh even though there were some very amusing lines and things the patients did. One man was drawing raunchy pictures. One man scooted along with a walker and could never catch a break. Someone always got to the chair he wanted just before he shuffled there and he never got picked in the nurse's game of if-you-had-to-shag-one.  One of the women was a balding former debutante who was obsessed with everyone else's hair. She was a good source of humor throughout. The male nurse would wear her wig and she'd slap him on the ass. He was also sort of a nice comic relief. At one point he started teaching the group some dance moves. "Pick the apple. Pick the apple. Put it in a pie. Put it in a pie. Sunshiiiiine and Raaaain."

I will certainly be thinking about this truly amazing theatrical experience for a long time. It was so poignant and real. It is also universally relatable because everyone knows someone who goes through some stage of alzheimers.